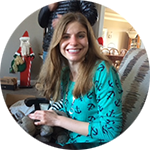 Brigette was your typical 19-year-old college student without a care in the world. In her eyes, life was perfect.

She was a solid student, having graduated Brebeuf Jesuit High School in Indianapolis. In addition to her academic success, she was a skilled artist, had played four years of high school basketball, and ran cross country and track. She fit in with many groups of friends in school and had a handful of very close girlfriends. Though Brigette rarely dated in high school she had many male friends affectionately referred to as “her boys.”

Brigette had always had a heart for the poor and struggling. Mission trips were her first love, and she had the opportunity to make trips to Nigeria and Ecuador, with many more in the works. She planned to be a registered nurse in order to one day continue serving through medical mission work.

After high school, she attended St. Louis University (SLU). Brigette speaks of her three semesters at St. Louis University as perfect. She carried a 3.5 GPA as a nursing student, preparing herself for a life in the mission field. She loved her roommates, was beginning to thrive in both cross country and track & field and had even earned an athletic scholarship her sophomore year. She enjoyed waking up early to prepare food for the homeless before her morning run and attending classes. Brigette also found herself falling in love with a fine young man who was two years ahead of her and also ran for SLU.

She was with her boyfriend that winter break of her sophomore year, driving to a New Year’s Eve dinner with friends from SLU. They were following the speed limit – only going 35 mph – and yet when they hit a patch of black ice, they still slid out of control. Brigette was driving, and the rear wheels of her car slid into the opposite lanes, with her driver’s side door facing the oncoming traffic directly. She was t-boned and suffered a traumatic brain injury when her head hit the frame of the car. She would spend the next 90+ days in the hospital.

It was that day, December 31, 2007, the day after her 20th birthday that everything in her perfect life came to a halt – never to return.

Brigette can no longer run as she has a drop foot as a result of her injury. That young man she loved was so dedicated and hopeful for Brigette’s recovery but soon realized his life had to move forward. Eventually he married. Working with missionaries as an RN was a now dream past. All those close friends? Many never even call and ask her how she is doing. Luckily, her two close girlfriends from high school, Kathleen and Jenna, are loyal friends even today. “The boys” from high school were also initially amazing at reaching out to Brigette, but it’s been over 14 years, and many are married with children. Life for most moves on.

Brigette, however, for the most part, is alone. Only family members are her constant support, which is so important but not enough for a young woman now in her 30’s. She prays every day for someone to love. She wants to have a family. She wants to drive and have her own income. It is a torturous existence to reflect on what once was, and now is not.
Depression and despair are under her “clown’s face” which consists of a BIG, white-teethed smile. She still has those beautiful blue eyes and a youthful look. But life is very hard. Life is unfair. She dares not ask WHY as it would drive her crazy. Instead Brigette remains faith filled and hopeful that she will one day, once again, have the companionship and community she craves.

Currently, Brigette lives with her parents, and they are a little concerned not only about her well-being now but also in the future. It is possible she would live with siblings once her parents can no longer help with her care, or, with no other options currently out there, she could end up in a nursing home, and this is the last thing she wants to do.

After Brigette’s initial recovery, she did live in another facility that promised to provide more independence for TBI survivors. She and her family felt it would help her regain some of her old life and provide a good support system. However, they failed to live up to this promise and did not actually help her regain independence.

She returned home and her family is now very involved in starting Villa Licci. Villa Licci would provide companionship for Brigette. It would also give her more of a sense of independence and somewhere to belong. She would be with others who understand her experiences and who would be there outside of her family to create the community she desires.