In the summer of 2011, Andrea’s life was filled with the stereotypical activities of a Hoosier mom. She was married to the love of her life with a four-year-old daughter and enjoyed country music, her career, spending time with her family and friends, and training for an upcoming half marathon.

On August 13, she was with friends at the Indiana State Fair standing in what was known as the “Sugar Pit” – the central area at the base of the stage for the most ardent fans of the band Sugarland. It was a Saturday evening full of excitement and anticipation.

But what nobody anticipated was a sudden gust of wind – nearly 60 MPH – part of a severe storm system threatening the area. This gust caused the stage rigging and part of the roof to collapse on the waiting crowd. Seven people died, and dozens were injured, including Andrea.

Andrea was trapped under the rubble of the collapsed stage and eventually freed and taken to a local hospital, where she remained in a coma for several weeks. After seven surgeries and four different hospitals, after a grueling nine months, she returned home to Pendleton, her life forever changed.

Her mother shares that everything changed for Andrea except “her beautiful personality.” Despite his initial support, Andrea is now divorced from her husband and they share custody of their daughter, though there are some basic parenting tasks that are challenging for her. She’s also lost several friendships and is unable to work outside her home.

Some of the major physical after-effects of her TBI include seizures, short-term memory loss, and the loss of the use of her left arm and hand. Though the intense rehabilitation is over, she still qualifies for some services and treatments. She is now dependent upon medication to control and treat some of these physical side effects.

Currently, as with most survivors, Andrea missed her independence and the ability to perform tasks that used to come with ease. It can be frustrating to think about the life that was and what it has now become.

Her family has also had to adjust, as her mother is her primary caregiver – assisting with her treatments and daily tasks. There is no “magic switch” or medicine that can return a survivor to their life before their TBI. It is an ongoing and sometimes forever process of adjusting and growing and trying to get better. It requires a hopeful attitude and lots and lots of patience.

Andrea has become connected with other survivors through the Heads or Tails support group and looks to a future where she may one day be able to live more independently and create more meaningful relationships. It is through this group she became acquainted with the idea of Villa Licci. Her parents, too, look into the future where they (and Andrea) may need more assistance. They are hopeful Villa Licci will provide a place with like-minded individuals who understand the complexities of brain injuries. Where Andrea can return to some level of independence and where her parents can have peace of mind about her living situation. 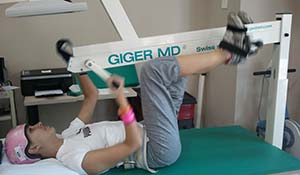 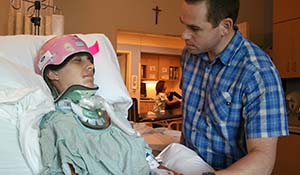 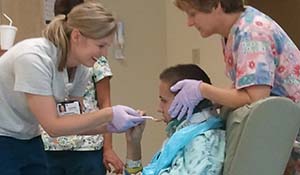